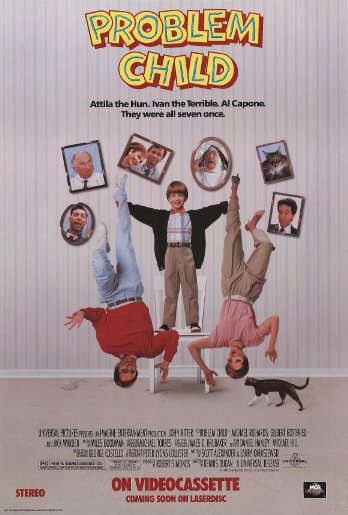 He's so bad, even the nuns refused to keep him.
"Just this morning, I came upon a seven-year-old. He's smart as a tack, a little rambunctious, but, weren't we all at that age?"
— Igor Peabody, introducing the Healys to Junior for the first time.
Advertisement:

Problem Child is a 1990 comedy film, the first film directed by Dennis Dugan and starring John Ritter. It surrounds the destructive antics of a seven-year-old boy known only as Junior, who has been shuffled from foster home to foster home. He ultimately lands in the hapless custody of good-hearted Ben Healy, and his wife, Flo. While Flo merely wants the social status that comes with being a mother, and quickly despises Junior, Ben just can't bring himself to give up on him. In the meantime, Junior unleashes a kind of Comedic Sociopathy on neighborhood kids and adults that hasn't been seen since Wile E Coyote And The Roadrunner.

This movie received overwhelmingly negative reviews during its theatrical release, and is Dennis Dugan's second worst reviewed film on Rotten Tomatoes, second only to Jack and Jill, but has since received cult status on home video.

It was followed by two sequels. The first, Problem Child 2, was released in 1991. After the chaos of the first film, Ben and Junior relocate to a new town and attempt to start their lives fresh. They both meet complications in doing so - Ben becomes highly sought after by LaWanda, a wealthy figure in town and a notorious man-eater and Child Hater, which spells trouble for Junior. Unfortunately, Junior already has his hands full at his new school, where among other things he has to contend with Trixie, the rare prankster kid with a sadistic streak to match his.

Problem Child 3: Junior in Love was a TV movie, which aired on NBC in 1995. Most of the characters were recast for this one, and Junior is again relocated to a new school. This time, he falls for a girl named Tiffany, and sets out to give his usual treatment to the other boys vying for her.

There was also an animated television series based on the movies. Its page is here.

Tropes associated with these movies: