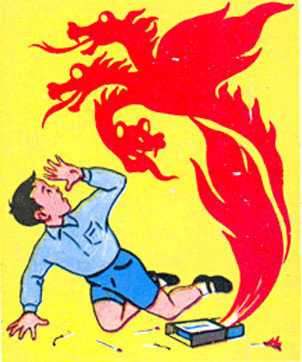 In Soviet Russia, matches light you!
The flames had slowed, but they still burned brightly, brighter, brighter, growing until they outright spat a chunk of fire over onto the bomb.
Frazie jumped back, confused... and then that fire started to stand up.
The small clump of flames grew and grew until it’d formed a sort of humanoid giant, its whole body ablaze and its hair a simple wisp of flame. Its face was carved out of fire, its eyes and mouth glowing orange as it grinned at a frightened Frazie.
— Later, Traitor, "Chapter 5: T.N.T.: Town of Nuclear Toons"
Advertisement:

One of the most direct ways to employ fire's destructive associations in fiction is to make the fire itself evil — or at least actively and consciously destructive — by simply having flames actually come to life. These flames will then run around and try to burn down the surrounding area, whether it's a forest, a building, or anything else. They may or may not have faces, voices, or personalities aside from wanting to burn things, but even if they do their goals will generally be limited to, or at least heavily themed around, setting things on fire.

A common way for this trope to be employed originated in older western cartoons, although it is not limited to them. In this form, living flames are often little motes of fire, like candle flames, with stubby little legs and no other features; they are often created by large, preexisting fires, budding from or hopping out of the larger blazes and trying to set even more things ablaze. More often than not, they're less individual creatures in their own right and more extensions of a wildfire's destructive potential and resiliency to attack, and other characters will be free to put them out en masse without moral quandaries being raised. Their natural enemies are firemen, who will often have to go through several comical misadventures to put out marauding flames. This is typically part of the type of cartoony comedy that features things like inanimate objects acting like sapient beings simply to torment the characters.

Another common depiction of this trope, more popular in video games, is to show the living fires as small, floating flames with no features save for eyes. Rather than burning things — although they may still do that — they are typically focused on directly harming the player character. They are often endemic to the Lethal Lava Land, heat-themed Hailfire Peaks and other levels where lava and fire are plentiful.

Regardless of the type, these things may also be created when someone is Playing with Fire.

Fortunately, you can usually stop them with water.

Subtrope of Evil Is Burning Hot and Elemental Embodiment. Sister Trope of Living Lava. See also Sinister Sentient Sun, which is basically this in a planetary scale; and Hitodama Light, which looks like floating fireballs but is actually something more ghostly. Hellfire sometimes takes this form. Compare and contrast Murder Water.

Fiendfyre is an incredibly powerful fire spell capable of destroying even Horcruxes, but it is also extremely difficult to control. When Crabbe used it against Harry and his friends, the only person he killed with it was himself and the soul fragment in the Horcrux.

Fiendfyre is an incredibly powerful fire spell capable of destroying even Horcruxes, but it is also extremely difficult to control. When Crabbe used it against Harry and his friends, the only person he killed with it was himself and the soul fragment in the Horcrux.