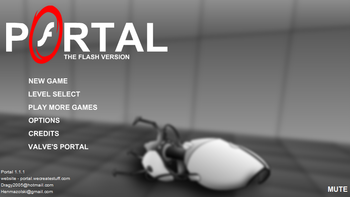 Portal: The Flash Version is an web-based flash game created by We Create Stuff

in dedication to Valve's Portal.
Advertisement:

The basic game mechanic is the same: Shoot two portals to move around an area that could not be accessed otherwise. The game is two dimensional, but, like the original 3D game, features an Affably Evil AI named GLaDOS who uses increasingly cruel traps in order to kill the player character. The game has lethal yet necessary energy balls, spike traps, Bottomless Pits, turrets and more.

The game has garnered some internet popularity, and can be played here.

A mappack for the original Portal was later released

, including ALL 40 levels from the original Flash game, additional bonus levels and features.

Oddly, the game was made sometime before Portal was released, so some in game details are incorrect.