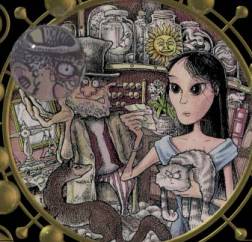 And the mathemagician, seeing her unfold the note and read its uncomplicated message, nods his head one and a half times, and squints at the future. She can see it, in no particular order; he can calculate it, one direction at a time. Together they see things very differently from the rest of us.
Advertisement:

A love letter is sent to a girl who can see the future but has no memory of the past. Despite her foretelling ability, she can't see who sent her the letter but she does know that it will send her on a lengthy journey to find the letter sender. Her friend, an elderly mathemagician, takes it on himself to calculate and map out the journey they're destined to take: one that involves puzzles and riddles that may or may not be solved, mundane and fantastic creatures with a quest of their own, and the titular planetarium where someone — or something — awaits their arrival. And at the end of all this, an overarching message that can be deciphered ahead of time if the person this story is narrated to is observant and clever enough.

Created online way back in 1999, Planetarium

still stands out as a highly inventive and unique story-puzzle fusion. The story unfolds gradually over a span of twelve weeks, with one part unlocked for every week, giving the reader-player time to solve the three puzzles given in the newest part. It isn't necessary to solve the puzzles to see more of the story and the puzzle solutions will be available to view at the end no matter how well or poorly you did on them, but successfully solving them fills up your "Table of Solutions" and enables you to solve the Major Puzzle and read the final message of Planetarium before it tells you, just as the girl knew what people were going to tell her before they actually did.

In short, Planetarium is a journey for both the characters and player with them being able to see things ahead of time with the right mindset. It is also a love story and puzzle game rolled up in one, where everything is interconnected by fate and the droll voice of the narrator. It is, to sum it up, in a category of its own.

This story-puzzle contains these tropes: