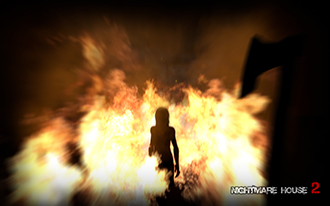 "You can't escape from Nightmare House."
Nightmare House is a free two-part horror modification of Half-Life 2. It can be found here

(Nightmare House 2 includes a revamped version of Nightmare House 1). It is not to be confused with the Super Mario World mod of the same name.
Advertisement:

Nightmare House 1 is a simple horror mod with no changes to the Source engine but some model edits. In it, you play a nameless protagonist who crashes his car in the middle of nowhere. Venturing into a nearby house, he finds it haunted by zombies and a mysterious ghostly woman. Eventually he escapes, but before he can get back to the road, the woman appears and blocks his path, and he blacks out.

Nightmare House 2 features more changes to the game engine, and a far longer storyline. In it, after the events of Nightmare House 1, the protagonist wakes up in a cell at the mysterious "Never Lose Hope" hospital, a massive hospital in the middle of nowhere. Featuring an actual plot, you attempt to escape the now zombie-infested hospital with the aid of various characters, and try to find the explanation behind the mysterious ghostly woman who seems to be following you.

You had to have Half-Life 2: Episode 2 installed in order to run it, but the latest, updated release turned the mod standalone, while also updating a few things.