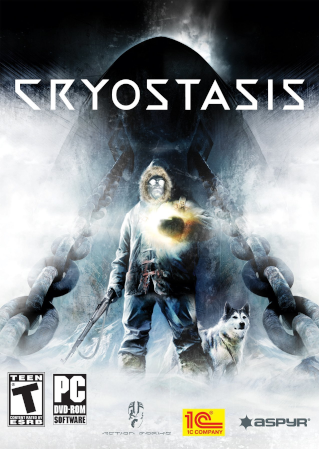 "This is the North Pole's welcome. No marching band, no flags, no speeches."
"As long as the dark foundation of our nature, grim in its all-encompassing egoism, mad in its drive to make that egoism into reality, to devour everything and to define everything by itself, as long as that foundation is visible, as long as this truly original sin exists within us, we have no business here and there is no logical answer to our existence....Imagine a group of people who are all blind, deaf and slightly demented and suddenly someone in the crowd asks, "What are we to do?"... The only possible answer is, "Look for a cure". Until you are cured, there is nothing you can do. And since you don't believe you are sick, there can be no cure."
—Vladimir Solovyov, quoted at the very end of the game.
Advertisement:

(Not related to "cryosleep" or similar concepts. For that trope, see Human Popsicle.)

Cryostasis: Sleep of Reason is a first-person Survival Horror game, released originally in December 2008, developed by Ukraine based studio Action Forms. It follows the experiences of Heroic Mime Alexander Nesterov as he investigates the shipwrecked nuclear icebreaker North Wind. The game starts off rather similar to most games of the genre, as Alexander is lost and confused within an unknown and hostile environment. As the aforementioned ship wrecked near the North Pole, ice and searching for heat are key motifs throughout the game. Freezing to death is a very real possibility. Also, the crew of the North Wind have gone mad and are intent on killing Alexander. Mild inconvenience.

Cryostasis rapidly morphs into more Mind Screw than almost any video game ever conceived. Interspersed with Alexander's conflict with the demonic presence on the ship is the heavily metaphorical tale of Danko, whose actions and flaws parallel those of the North Wind's Captain. The monsters you fight begin to morph into disturbing personifications of the crew's shortcomings. Despite the bleak setting, all of the action leads up to a rather heartwarming ending drenched in symbolic meaning.

Alexander has an interesting power at his disposal, named the Mental Echo; He can enter the memories of the dead and alter their actions, correcting their mistakes so they at least do not die in despair, or simply helping them survive just a moment or so longer so that parts of the ship that were sealed before become accessible. Doing so also provides an insight into exactly what happened when the ship crashed, and the relationships between key characters. This is an interesting storytelling technique as it means the main character never physically comes into contact with a single sane, living person during his adventure.

A major showcase for Nvidia's PhysX graphical engine, Cryostasis is a very beautiful game too, rivaling even Crysis. However, the game does not utilize more than one core in current-day CPU's, meaning the game stutters even on high-end PCs. It is also quite buggy in parts, which when combined with the slow storytelling and (some would say) repetitive level design can frustrate and bore some players. However the game is welcomed as, at the very least, an interesting experience.