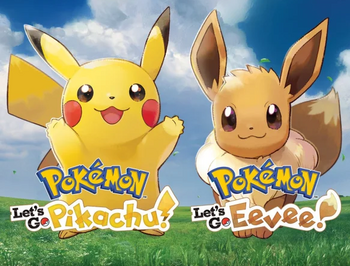 Your first adventure in a new style.
First announced on May 29, 2018, Pokémon Let's Go, Pikachu! and Pokémon Let's Go, Eevee! are the final set of seventh generation games in the Pokémon series, and the first mainline installments released for the Nintendo Switch. The titles are inspired by Pokémon Yellow and have had a worldwide release on November 16, 2018.
Advertisement:

As the name suggests, in addition to the traditional gameplay seen in the mainline RPGs, Pokémon Let's Go, Pikachu! and Pokémon Let's Go, Eevee! shares many of its mechanics with Pokémon GO, most notably using the latter's encounter and capture mechanics instead of traditional Random Encounter battles. The games have additional functionality with the mobile game as well, in the form of trading Kanto Pokémon caught in Pokémon GO to the Switch games. These are also the first titles in the series to feature Co-Op Multiplayer, allowing two players to explore the Kanto region together in order to capture Pokémon and partake in double battles. You can also Mega Evolve your Pokémon and obtain Regional Variants that are more common in Alola than in Kanto.

The game also features a brand new family of Pokémon species—Meltan, a tiny Steel-type Mythical Pokémon with a body made of liquid metal and a hex nut for a head; and its evolution, Melmetal, who sports a hardened body and large, flexible arms.

Pokémon Let's Go, Pikachu! and Pokémon Let's Go, Eevee! launched alongside the Poké Ball Plus, a special Joy-Con that looks like a Poké Ball that can be used to play the game, as well as carry caught Pokémon out into the real world for special bonuses and connect to GO to enable similar functions to the Pokémon Go Plus peripheral (It also costs 50 bucks, and is the only way to get Mew in this game).