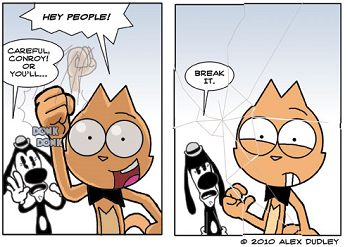 A character taps on your TV screen from the inside to get your attention. Yes, that's right — someone is Breaking the Fourth Wall by touching it!

As Technology Marches On, the "screen glass tap" sound effect is still in use despite being an Artifact due to the rise of flat-screen LCDs not made out of glass, though some uses now feature a "dull thump" sound effect instead to compensate for this change.

Compare with Camera Abuse, which fools with the camera, not the screen you're viewing.