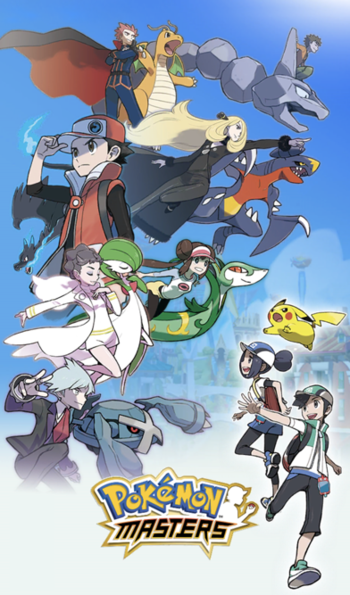 Pokémon Masters is a 2019 mobile game in the Pokémon series that was released for Android and iOS devices on August 28th, 2019, produced in cooperation between The Pokémon Company and DeNA, the same company who co-developed with Nintendo for mobile games based on their existing franchises. It was then rebranded as Pokémon Masters EX on its first anniversary.
Advertisement:

Masters takes place on the artificial island of Pasio, where the Pokémon Masters League is being held: a grand tournament that invites Trainers from the world over to compete against each other. In Pasio, Trainers form sync pairs, a duo between a Trainer and a single Pokémon, and ally with other sync pairs to compete in 3v3 Pokémon battles. You are placed in the shoes of one such Trainer, who arrives on Pasio and quickly befriends Kanto Gym Leaders Brock and Misty. To gain entry to the PML, the player and their allies set out to collect five Badges held by particularly strong Trainers scattered across the island, and along the way add some familiar faces to your party on the journey to conquer the PML. However, during their journey they will have to contend with some particularly powerful foes: Lear, resident Jerkass and the creator of Pasio, and the villainous Team Break, a band of masked thieves who steal Pokémon from other Trainers.

Later, after the conclusion of the PML, the story shifts away from the player character as everyone faces a new threat: Team Rocket's leader Giovanni schemes to take over Pasio by manipulating every evil faction leader and their subordinates to further his own agenda. In the meantime, Paulo, a rival to the player character, faces his shortcomings as a trainer and quietly ponders how to become stronger, even if it means taking unconventional methods to do so seeing the villains showcasing their ill-gotten powers.

The game enables players to form teams using famous Pokémon Trainers from past main-series games. The concept originated from Game Freak character designer and founding member Ken Sugimori, who had the idea for a game where every single character from past games would appear.

The game has a four-minute animated trailer.