The Problem with Pen Island 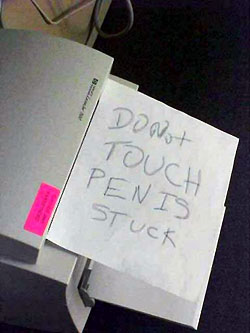 Ouch.
"I was in a bookshop and I said to the assistant, 'Excuse me, what's this "psycho the rapist" section?' She said, 'It's pronounced "psychotherapist".'"
— Jimmy Carr
Advertisement:

Some names and titles are stored in a way that is not case-sensitive, but doesn't allow spaces to separate words. So how do you tell one word apart from the next? If you're not careful, you can end up with names that are quite... odd. Thus, this trope.

Compare Mondegreen Gag, which applies to spoken language rather than written language.

See this page for the hilarity that could arise from trope names. Also known as scripta continua.

Pen Island no spaces all caps

Pen Island no spaces all caps