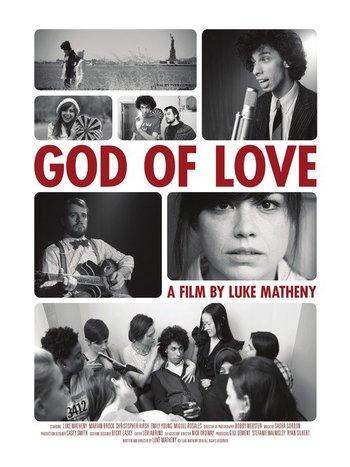 God of Love is a 2010 short film (18 minutes) directed by, written by, and starring Luke Matheny.

Matheny plays Raymond Goodfellow, a lounge singer in a band who also has exceptional aim. He combines those two unrelated talents in his act: while singing Frank Sinatra-style crooners, Raymond simultaneously throws darts at targets hanging on the side wall. Ray is in love with Kelly, the drummer in his band. Kelly for her part is oblivious to this and is instead in love with Fozzie, the guitarist, who says he is not interested and wouldn't make a move on someone his friend likes anyway.

Ray has been praying to God every night, asking that Kelly return his affections. One day, he receives a mysterious package that appears to contain the answer to his prayers: a set of "Love Dart 3000" darts. The darts, which were sent from the Olympus Corporation, promise that whoever is hit by them will be immediately attracted to the first person they see, and will remain so for precisely six hours. If the love is meant to be, it will last, and if it isn't, the effect will dissipate. After successfully testing the darts on a random attractive woman that he matches with Frank the bassist, Ray uses the darts on Kelly—with surprising results.