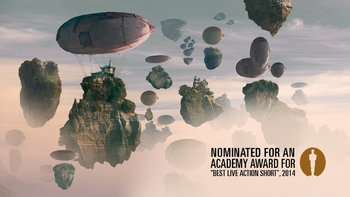 Helium is a 2014 short film (23 minutes) from Denmark, directed by Anders Walter.

Enzo (Casper Crump) is a janitor working at a children's hospital. While about his duties he meets Alfred, a boy of about six years old with an unnamed terminal illness. Alfred talks about how his parents say he's going to heaven, but heaven sounds boring. Enzo notices the toy blimp by Alfred's bed, the toy blimp hanging from the ceiling, and the balloons, and makes up a story about an alternative to Heaven called Helium.

As Enzo tells to Alfred, when the time comes, a dirigible will come to Alfred's hospital room and take him away. The dirigible will whisk him off to Helium, a magical world where houses float in the sky and the very air is sparkly and shiny, a place where Alfred will be strong and get to play as much as he wants. Enzo makes repeated visits to Alfred's sickroom, spinning more fantastical tales of the wonderful world.