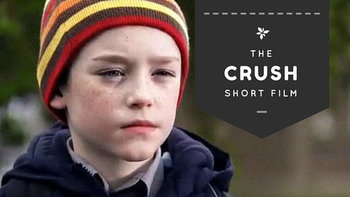 The Crush is a 2010 short film (15 minutes long) from Ireland, directed by Michael Creagh.

Ardal Travis is an eight-year-old schoolboy with a crush on his pretty young teacher, Miss Purdy. He reveals his feelings by giving Miss Purdy a ring, which she accepts with good grace. When his parents tell him that 16 years old is the minimum age for marriage, he makes a note in his journal that he will marry Miss Purdy on his 16th birthday.

Ardal's dreams of romance are shattered one day when he and his mom are out and about and he sees Miss Purdy, wearing a considerably more expensive ring, and in the company of her fiancé Pierce. Broken-hearted, young Ardal decides to do something about it.

Namely, he gets a gun from his father's closet.

No connection to feature film The Crush.