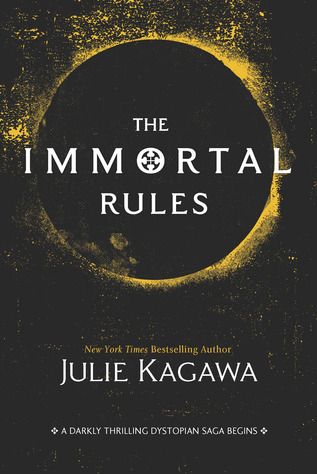 "Sometime in your life, Allison Sekemoto, you will kill a human being. It is not a question of if it will happen, but when."
— Kanin

The Immortal Rules is a Young Adult book by Julie Kagawa and the first in her Blood of Eden Series. Sixty years into the future, a devastating plague has wiped out most of humanity, utterly gutting civilization as we know it. Those descended from the survivors live in cities controlled by vampires and are used as "Blood Cattle", their blood donated every so often the the rulers of these cities. Pets—human servants of the vampires—live a pampered life within the inner circle of their vampiric masters while most ordinary citizens scrape by with barely enough to survive. This however is far preferable to life outside the city walls in the ruins of the old world, populated by the vicious rabids. There are also Unregistereds, those who, in defiance of the vampire government, do not submit to their bloodletting and exist as outcasts on the fringes of the meager society, and their very existence is an automatic death sentence if captured.

Allison Sekemoto is one such person, living on the streets of the vampire city of New Covington since the death of her mother. Scrounging for a living with her friends, and hating the vampire-run government that is responsible for her mother's death, Allison is changed into the very thing she despises by the vampire Kanin after a near-fatal accident. Now a vampire and on the run, she must survive in the world outside of the city she has known all her life, while wrestling with the monstrous urges that come with her new condition.

The Blood of Eden series has three books:

The Immortal Rules contains examples of: