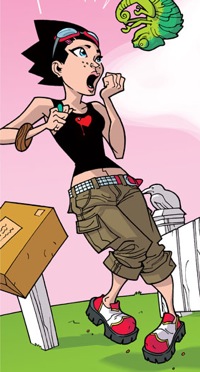 Nadia, on entering the Inbetween.
"Riiiight. I tripped. Hit my head. And fell into a Disney movie."
— Nadia
Advertisement:

is a Webcomic by Ramón Pérez. It follows Nadia, a spiky-haired, goggles-wearing, scooter-riding delivery girl whose life is disrupted one day when she steps through the white picket gate and ends up somewhere else, "inbetween", in a bizarre, surreal world of a child's imagination — playful at first, but soon turning into not just dream but nightmare. Danger and wonder lurk around every corner.

The comic has been on a long hiatus with occasional updates. Unfortunately, because of a hacker attack, the site is currently down until further notice.

This work displays examples of:

Advertisement:
The Power part of their hats is acting as small Portal Doors (Mr. B. can fit through, but nobody larger can) to somewhere - they can be used as telephone, as well.