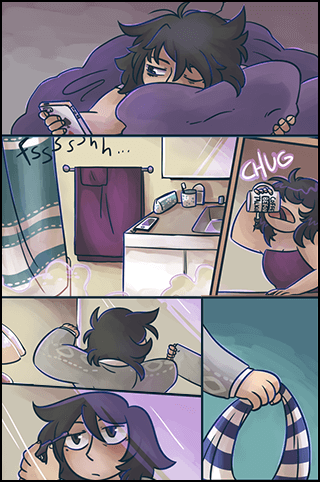 Look familiar? It should. Sequences that show a character following their average Morning Routine are incredibly common. It's a standard story opener, for several reasons: it's a way to introduce a character immediately, it shows the normal routine (to better contrast when wackiness ensues), and it's something we're all pretty familiar with—even those of us who rue mornings.

This can also be used as an Establishing Character Moment— we know someone is Super OCD if he follows a strict schedule and a slob if he sniffs his armpit and decides he can skip the shower.

Like the White Void Room, it's something of a cliche and is commonly perceived as an opening that serves until the plot takes hold. Then again, like all tropes, it can be used to great effect— for instance, the opening sequence

of Dexter. Surprisingly, Slice of Life works can avoid this for quite some time — mainly because there's a choice of other routines.

Synchronized Morning Routine is a subtrope. Wake Up, Go to School, Save the World isn't. See also Day in the Life. Compare Easing into the Adventure, Good Morning, Crono. Often ends with the character Late for School or work.

The opening scene in the present day of the film shows Blu and Linda's morning routine.

The opening scene in the present day of the film shows Blu and Linda's morning routine.