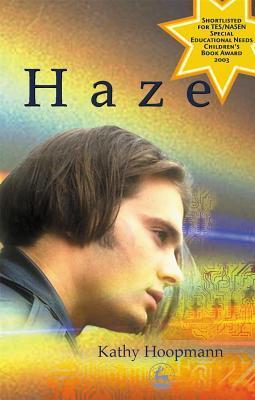 Haze: An Asperger Novel is a young adult novel by Kathy Hoopmann.
Advertisement:

Sebastian "Seb" Taylor is an unhappy, socially awkward teenager who is brilliant with computers but struggles in school. Madeline Story is a fellow outcast, a quiet girl with an abusive mother and a mysterious online friend. When the two befriend two girls named Kristie and Jen, their lives improve. The new computer teacher, Miss Adonia, tutors Seb and suggests to his parents that he has Asperger's, but she seems to have ulterior motives.