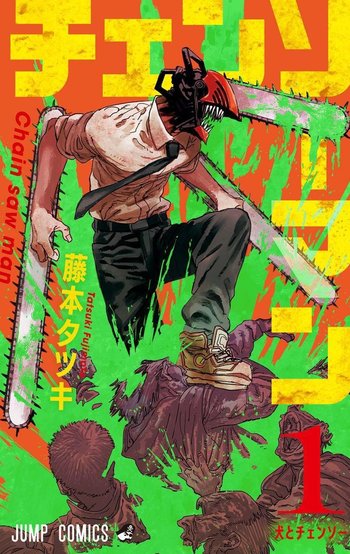 "Which one would you choose? The Town Mouse or the Country Mouse?"
— Reze
Advertisement:

Denji is a loser who will do literally anything for money, due to inheriting an enormous debt to some local Yakuza Loan Sharks after his father seemingly committed suicide when he was a child. This includes hunting Devils, dangerous Anthropomorphic Personifications of human fears that randomly appear in the world on a regular basis. Having no friends other than his pet Devil Pochita, a dog-like creature that is also a chainsaw, and having sold several of his own organs now to survive, Denji seemingly has no hope of a future. But even so, Denji still dreams of living a better life.

Unfortunately for him, Denji gets double-crossed after his loan sharks try to make a deal with a Devil of their own. Hacked to pieces and thrown in a dumpster, Denji's sad, short life seems over...

...Until Pochita merges with Denji's body, offering his heart in exchange for getting to finally see Denji realize his dreams of a happy life. In the process, Denji gains a blood-based Healing Factor and the ability to transform into some sort of Human Devil Hybrid that can grow chainsaws out of his head and limbs by pulling a new ripcord in his chest. After slaughtering the Devil that killed him, Denji is discovered by the government's public safety Devil Hunters, and their boss, a mysterious woman named Makima, offers Denji a choice: be hunted and die as a Devil, or become her pet and hunt other Devils for her.

Of course, Denji picks the latter. It included the promise of free room and board after all.

Also has an upcoming anime adaptation by MAPPA, set to premiere in October 2022. You can watch the first trailer here