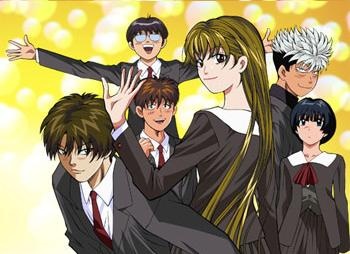 Cheeky Angel (Tenshi na Konamaiki) is a shonen manga by Hiroyuki Nishimori (who also did Kyou Kara Ore wa!!) which ran in Shonen Sunday from 1999 to 2003 and was compiled into 20 volumes. It received a 50-episode anime adaptation that aired on TV Tokyo from 2002 to 2003.

9-year-old Megumi is a rough-and-tumble boy with poor manners who always gets into fights. One day, as he and his friend Miki are playing by the river, Megumi rescues a mysterious old man from some thugs. In return, the old man gives him a magic book with a wish-granting spirit who grants Megumi a single wish. Megumi wishes to be a big, strong, manly man. The catch: the spirit is a trickster spirit who always reverses the wishes he grants...so Megumi is transformed into a girl. In frustration, Megumi throws the book into the river. He and Miki run home, to find that everyone else's memories have been altered: only Miki and Megumi remember that Megumi was ever a boy.

Fast forward six years. Miki and Megumi are just entering High School, and Megumi has grown to be a tall, gorgeous girl with waist-length hair that Miki forbids her to cut. Megumi still vows to find the book...if she can dodge the attentions of the school bully and of the Megumi Instant Fan Club....