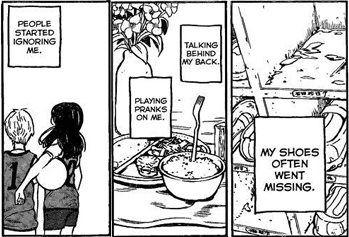 In manga, especially works intended for the shoujo demographic, bullies tend to read from the same playbook. They tend to be more relational bullying or anonymous intimidation than the physical bullying more common in shonen works. These tactics are most common in shoujo manga, but not limited to them; josei, seinen, and even some shonen works are also full of this, and Western works that treat bullying may use some similar patterns as well. Unfortunately, this is Truth in Television, because a lot of these tactics tend to be used by real-life bullies (albeit in a usually more realistic manner), which isn't surprising since a lot of fictional bullies are based on real-life bullies that the author/creator had to face as a kid.
Advertisement:

Tactics that are usually lampshaded instead of played straight: