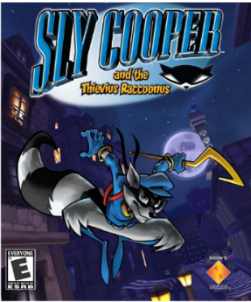 There's a new thief in town!
"On this mission, I would either become a master thief like my ancestors before me... or fail, and allow my family name to bite the dust!"
—Sly Cooper

The first game of the Sly Cooper series, released in 2002 for the PlayStation 2 console. Also known as Sly Raccoon in European and Australian territories.

Young raccoon thief Sly Cooper is the latest member of the Cooper Clan, a lineage of master thieves who listed all their thieving skills and knowledge over the years in a grand book known as the Thievius Raccoonus. Years ago, a rival gang known as the Fiendish Five killed Sly's parents, stole the book, tore out its pages and scattered them to their lairs across the world.

Now, having formed a gang with his old orphanage pals, the tech-genius Bentley and getaway driver Murray, Sly must recover the pages of the Thievius Raccoonus from the Fiendish Five through prowling their territories and taking out their operations. Meanwhile, Sly and the gang must keep ahead of Inspector Carmelita Fox, an Interpol police officer who vows to one day capture Sly and put him away for his crimes.

"Fire in the Sky"

"Fire in the Sky"