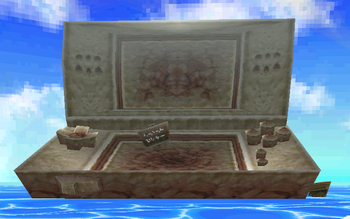 Welcome to Dee Ess Island.
A console cameo is where the game system on which you're playing (or another by the same company) appears in some form in the game you're playing. Developers, when looking for inspiration for a fictional gadget, enjoy modeling amazing pieces of technology on the console that the player is using. This not only makes the interface really easy to design, but also makes the game just a bit more immersive in that respect. Less common is modeling an object off another console by the same company.
Advertisement:

This has to appear in a video game for it to count; systems appearing in other media don't count unless it is based on a video game (Pokémon for example). PCs don't count unless the program is made exclusively for a single operating system and the game makes it clear which operating system (or a parody thereof) is being used. Finally, it doesn't count if the game system only appears in order to demonstrate controls or in something like the Wii's safety screens.

A Sister Trope to Product Placement, the main difference being that if you see it, you already own the placed product, or it's a call back to an outdated piece of equipment that is no longer for sale. Also compare Company Cameo.