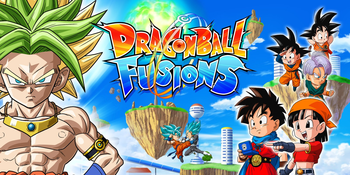 Dragon Ball Fusions is an Nintendo 3DS RPG released on August 4, 2016 in Japan, and was released in the U.S. on November 22, 2016. One day the main character alongside his friend/rival Pinich gather all the Dragon Balls and summon Shenron. They wish to make the greatest budokai tournament in the world. Shenron grants their wish; a wormhole appears sucking both the player and Pinich into another dimension where cites appear on floating islands. Meeting Bulma, she explains that the wish was granted and a tournament is being held to decide who the strongest fighter is, bringing forth individuals from space and time to do so. However the tournament requires a team of five people to enter. Wanting to enter the tournament but also wanting face each other, the two split up to explore this new world and recruit allies to join their group.

The gameplay is turn-based with the added flair of being able to knock back opponents into your allies or other enemies for more damage. Usually 5-v-5 battles, with some characters being able to fuse during battle. Your team has 5 ways to attack: a simple melee attack, a simple ki attack and 3 special techniques (which use up energy). If you build up the ultra-gauge, your team will be able to do one of two things: an Zenkai Attack which if done successfully will unlock your enemy as a playable character, or Ultra-Fusion, which is a 5-way metamoran fusion that turns the entire team into an giant, powerful warrior.