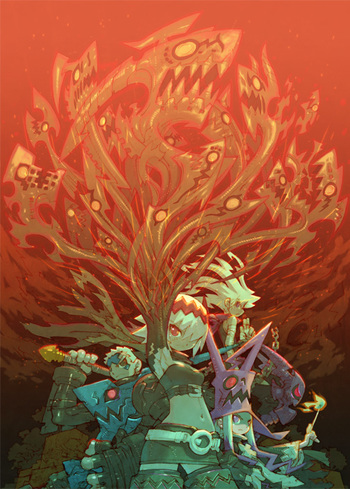 They bear the mark of the Astral Dragon...
Advertisement:

Dragon: Marked for Death is a Dark Fantasy 2D Action RPG developed and published by Inti Creates for the Nintendo Switch, and released on Steam on April 21, 2020. Notably, the game prominently features most of the key staff from the Mega Man Zero and Mega Man ZX series that Inti Creates is famous for developing, and is explicity designed to feel familiar to their most famous titles.

In ancient times, a brutal war raged between Celestial Primatus and the Astral Dragon Atruum in the realm of the gods. Atruum was dealt a mortal blow by Primatis, the forces of the Astral Dragon were quickly wiped out. Atruum, whose body had plunged to the earth below, offered the blood from his dying body to a small clan of humans to save their lives, transforming them into the Dragonblood Clan, humans who bear the mark of the dragon on their bodies and worship Atruum as their guardian deity.

In the present-day, the descendants of the Dragonblood Clan live a quiet, peaceful existence in a hidden village due to being ostracized by other humans. However, this peace is disrupted when the Medius Empire invades their village and lays waste to it, killing many and destroying their sacred home while kidnapping the village oracle, Amica. Swearing revenge against Medius, the remaining members of the Dragonblood Clan take up arms and set out to rescue Amica and exact vengance on those who done them wrong.