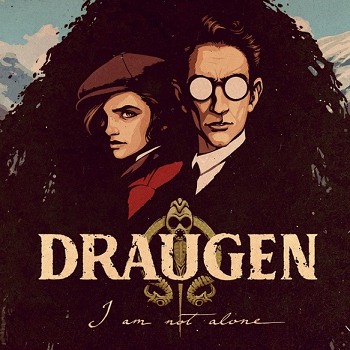 Draugen is an Environmental Narrative Game developed by Red Thread Games of Dreamfall Chapters fame, and released for PC on May 29th, 2019.
Advertisement:

It is set in 1923, and follows the story of a scholar from Hanover, Massachusetts named Edward Charles Harden and his ward Lissie, as the two arrive from the US to the Norwegian town of Graavik, to search for Edward's missing sister, Betty, a journalist working for a New York newspaper. Betty recently went to Graavik for reasons unknown, but disappeared under mysterious circumstances during her trip.

However, they find the town abandoned, and seemingly for a long time — else the fishing boats wouldn't have started rotting and equipment in the mines would not have gotten overgrown. The fact that the town's craftsmen abandoned their prized tools of trade to such fate only underlines the gravity of the situation, and deepens the mystery before the pair. The game is mainly inspired by works from Norwegian Romanticism, including Henrik Ibsen and the painter Hans Gude, taking a look at the darker underbelly of rural Norway, but also adds a dash of the works of H. P. Lovecraft.