A character page for Dragon: Marked for Death.

General
A clan descended from those who saved the Astral Dragon Atruum after he was felled in battle, and who worship him as a god.

Empress
Voiced by (Japanese): Kaori Ishihara (Type A), Ai Kayano (Type B), Reina Kondo (Type C), Yoko Hikasa (Type D), Rumiko Varnes (E and F), Lynn Harrys (G), Kimberly Forsythe (H)
The daughter of the chief of the Dragonblood Village. While she was visiting a neighboring village, her fiancé and family were killed when the Divine Knights attacked the Dragonblood Village. She wields a sword and the Dragon Arm — a Dragon Scar that takes the form of an Arm Cannon, and can transform into a BFS and a tail-like whip.

The Empress is set to be released as a guest character in Blaster Master Zero II on April 21, 2020.

Warrior
Voiced by (Japanese): Yuichiro Umehara (Type A), Junichi Suwabe (Type B), Yuuichi Nakamura (Type C), Taku Yashiro (Type D), Jeff Manning (E and F), Iain Gibb (G), Walter Roberts (H)
A warrior of the Dragonblood Clan whose foster brothers were killed when the Divine Knights attacked the Dragonblood Village. His Dragon Scar, the Dragon Body, manifests as a blue cuirass. He wields a battleaxe, can enter a berserk state to boost his attacks, and can generate healing barriers to shield himself and his allies.
Shinobi
Voiced by (Japanese): Kouki Uchiyama (Type A), Tomokazu Sugita (Type B), Wataru Takagi (Type C), Ayumu Murase (Type D), Peter Von Gomm (E and F), Jack Merluzzi (G), Iain Gibb (H)
A young warrior of the Dragonblood Clan who trained as a ninja alongside his best friend, who one day ran off to the Kingdom of Marlayus. He was forced to hunt his friend down and returned to the Dragonblood Village to find it destroyed. His Dragon Scar, the Dragon Legs, manifests as a pair of greaves that grant him superior speed, agility, and jumping abilities.
Witch
Voiced by (Japanese): Shiori Izawa (Type A), Maria Naganawa (Type B), Kaori Nazuka (Type C), Yumiri Hanamori (Type D), Terry Osada (E and F), Julia Yermakov (G), Kimberly Forsythe (H)
A girl of the Dragonblood Clan who is their last known magician, raised by her mother-in-law in the Magic Kingdom of Litus. After her mother-in-law's death, she journeyed to the Dragonblood Village only to find it destroyed. Her Dragon Scar is on her head and transforms her hair into a hat-like construct of Atruum's head. She can cast a variety of spells, enabling her to act in an offensive, defensive, or support role.
Amica the Dragonblood Oracle
The Dragonblood Clan's priestess and oracle, who was captured by the Divine Knights.

Yulutury, Gallus, and Alba
A trio of mercenaries the Dragonblood has a habit of crossing paths with on their quests. Unlike most, they respect the Dragonblood for their fighting skills and show proper thanks whenever they succeed in saving their bacon.
Bao
An information gatherer who always has some useful knowledge to pass onto the Dragonblood during a mission.

Epos
An inhabitant of the slums and the first person the protagonist encounters upon reaching the imperial capital.
Cauda
The kindly and deeply religious head of an orphanage, who hires the protagonist to slay a werewolf after it mauls a young girl under his care.
Ciconia
The kindhearted matron of the orphanage outside Ensys Castle.
Divine King

The current king of Medius and the man reputed to be the closest to the Celestial Primatus. However, such a station is not enough for the old king, who desires eternal life so that he might rule forever, and his drive to achieve this leads him to destroy the Dragonblood Village and inadvertently become the main target of the Dragonblood's desire for vengeance.

Balenno
Bandero
The first mate of the merchant vessel.

Princess Miya
The princess of Marlayus and a descendant of the Divine Family.

Equus
Centaur-like Deva that are emissaries of the Celestial Primatus. A Named Monster version called The Trampling Lance can be found in "Lost in White".
Ogre Prince and Ogre King
The leaders of an encampment of ogres and goblins near Sica Village, fought in "The Ogre Fort". A Named Monster version of the Ogre Prince called The Demon's Puppet can be found in "Tomb Rescue".
Mandrake
A giant plant monster that uses a lure in the form of a beautiful woman coming out of a flower to hide its true form underground.
Cthulhu
A ship-eating sea-monster — unrelated to the Asura or the Deva — terrorizing the Lanza Channel, fought in "Sea of Tumult".
Hermit Kings
Incredibly large Giant Enemy Crabs that prove to be among the more powerful, if common, foes the Dragonblood encounter.
Divine Knights
The elites of the Kingdom of Medius, blessed with powers by the Celestial Primatus in a manner not so dissimilar from the Dragon Scars of the Astral Dragon Atruum. They were the ones who carried out the extermination of the Dragonblood Village, and they take the usual dislike of Atruum's chosen to a fanatical level.
Twin Dragon
A supposedly immortal crab-like Asura living in the depths of the littoral caves beneath Cadena Forest. It is fought in "Undying Dragon" and "Twin Dragon's End".
Minister Sumahiko
The lord of Muramasa Castle and a member of the Dragonblood Clan residing in Marlayus, fought in "The Castle Burns".
Jinryu
The leader of the branch of the Dragonblood Clan residing in Marlayus, fought in "The Castle Burns".
Vasith
The commander of the Legion of Divine Knights, who led the genocide against the Dragonblood Clan on the orders of the Divine Family of Medius.
Tonitrus
A powerful humanoid Deva and emissary of Primatus fought at the top of Uos Tower in "Truth in Heaven".
Asura Goblin
A powerful Asura sealed in the Asura Gate, fought in "Calamity's Portent." A blue ice-type Asura Goblin is fought in the "Infernal Labyrinth" DLC level, three red fire-type Asura Goblins and one yellow lightning-type Asura Goblin are fought in the "Resurging Flames" DLC level, and another blue ice-type Asura Goblin is fought in the "Invisible Anger" DLC level.
Lycanthrope
The second unique boss of the Dragonblood Bandit questline, a savage werewolf that has been prowling Medeus's derelict Ensys Castle, devouring any adventurers foolish enough to dry hunting it. When the werewolf bites a young orphan girl, infecting her, the protagonist is hired to hunt down and kill the beast by Cauda, the head of the orphanage. It is fought in "Werewolf Hunting", with a second one appearing in "The Bell Tolls".
Rivalis, AKA the Dragonblood Bandit
A mysterious young man of the Dragonblood Clan who works as a bandit, and is the titular character of the "Dragonblood Bandit" DLC questline. He is a recurring boss, being first encountered and fought in the "Eastern Treasures" level. His Dragon Scar is on his arm and manifests as the Dragon Fist, which can take the form of an Arm Cannon. 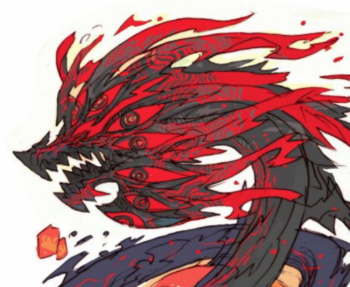 The Astral Dragon and nemesis of the Celestial Primatus, whose body was slain and cast down to the planet — becoming the continent of Remilia — but whose consciousness was saved from death by the precursors of the Dragonblood Clan, and is worshipped as a god by them. The Blood Moon serves as a manifestation of his power. 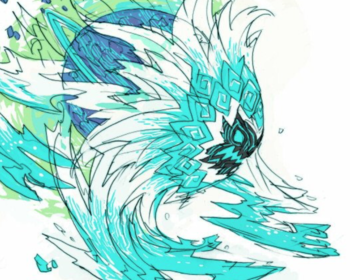 The Celestial and nemesis of the Astral Dragon Atruum, worshipped by the Kingdom of Medius. The Alabaster Moon serves as the locus of his power.