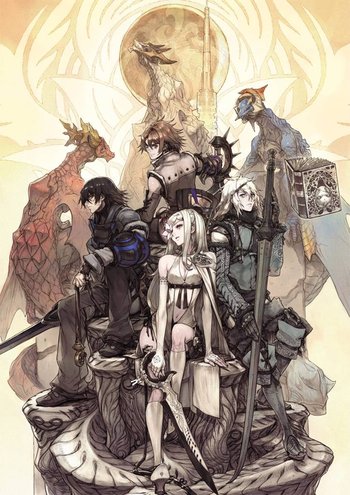 Our main "heroes." From left to right  Caim, Angelus (the red dragon), Nowe, Mikhail (the white dragon), Legna (the black dragon), Nier, Grimoire Weiss (the book), and Zero. Not pictured: 2B, 9S, and A2; Fio and Levania, Hina and Yuzuki
I hear a sound.
Advertisement:

Drakengard, known as Drag-On Dragoon (Japanese: ドラッグ オン ドラグーン commonly abbreviated as DOD) in Japan, is a series of action role playing video games published by Square Enix. The eponymous first game in the series was released in 2003 on the PlayStation 2, and has since been followed by a sequel and a prequel. It was conceived by Takamasa Shiba and Takuya Iwasaki as a gameplay hybrid between Ace Combat and Dynasty Warriors 2, with the ability to switch between on-foot hack-and-slash gameplay and riding a dragon for flight-sim fighting action. The story was created by Shiba, Iwasaki, Yoko Taro, and Sawako Natori, who were influenced by European folklore and popular anime series and movies of the day. Shiba, Yoko, and Sawako have had involvement in an entry of the series since its debut.

A Spin-Off series was created in 2010 named NieR, set in an alternative reality and followed by a sequel called NieR: Automata developed by PlatinumGames with Yoko Taro as director, same as the original series (not counting Drakengard 2).

The setting of the main series is a North European-style dark fantasy world where humans and creatures from myth and legends live side by side, while the spin-off game is set in an alternate reality leading from one of the first game's possible endings. The stories generally focus on the fortunes and personalities of a small group of protagonists either directly or indirectly connected to and affected by the events of the story. Dark or mature plot and character themes and multiple endings have become a staple of the series. Their popularity in Japan has resulted in multiple adaptions and additional media in the form of novelizations and mangas.

The series is considered highly popular in Japan, having sold well and gaining a cult following, though it appears to be a niche series in western countries. The main games have become noted for their dark storylines and mixture of ground-based and aerial combat, while Nier stood out because of its mixture of gameplay styles. The series has received mixed to positive reception in both Japan and western countries: the majority of praise has been given to its story and characters, while the gameplay has been criticized for repetitiveness. NieR: Automata seems to have finally broken this trend, releasing to excellent reviews and being showered with praise in both the gameplay and story departments.

Tropes that appear in the series as a whole: