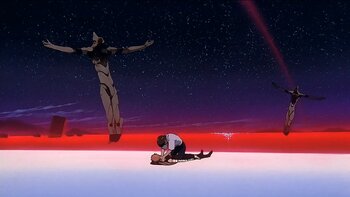 What exactly were you expecting?
"Time is dead and meaning has no meaning! Existence is upside-down and I reign supreme! Welcome, one and all, to WEIRDMAGEDDON!''
— Bill Cipher, in the eponymous episode, Gravity Falls
Advertisement:

Civilisations in fiction often have a habit of being consumed by nuclear war, destroyed by asteroid strikes, massacred by alien invaders, overwhelmed by the living dead, devoured by out-of-control nanomachines, or annihilated when their planet blows up. But in this case, the apocalypse is on acid, and things are just plain weird.

And in the resulting world, reality is well and truly out to lunch. An Eldritch Location with Alien Geometries everywhere, incomprehensible creatures roaming the ruined streets, time itself may break down, and simply looking at this bizarre hellscape can drive the strongest-willed insane in mere moments.

It may have been caused by a sufficiently dangerous Eldritch Abomination or Reality Warper, the energy of Primordial Chaos somehow leaking into reality, powerful magic gone very, very wrong, or perhaps arrogant scientists messing around with Things Man Was Not Meant to Know. Often, however, there is no explanation available, and the characters, no matter how intelligent or skilled, can't change a damn thing about it.

Older Than Feudalism, given that the end of days as described in the Book of Revelation is chaotic and incredibly strange.

Naturally, this can be the outcome of the Cosmic Horror Story. The end result might also be a World of Chaos. A Sub-Trope of Apocalypse How and The End of the World as We Know It. Compare Signs of the End Times, when strange things start happening before the apocalypse.