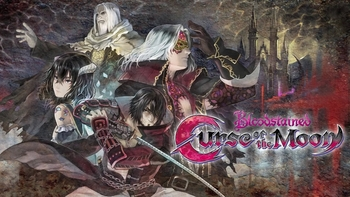 On the night of the full moon, demons called forth by evil alchemists emerge from a land beyond ours and ravage the earth, becoming a threat that spells the end of mankind as we know it. On this night, one man, a warrior from the east, arrives to exterminate the demon threat for the sake of both his friends and the survival of the human race. However, to destroy the demons once and for all, he must find solace and support in unusual allies...

Bloodstained: Curse of the Moon is a Retraux 2D action-platforming game released for the Nintendo Switch, Nintendo 3DS, PlayStation 4, PlayStation Vita, Xbox One, and PC in 2018 by Inti Creates, one of the former developers of Bloodstained: Ritual of the Night. Curse of the Moon came to fruition as a stretch goal from the Kickstarter campaign that crowdfunded the original Bloodstained project, whereupon the stretch goal promised to release an 8-bit style spinoff title to the core Bloodstained game.

The game draws heavy inspiration from the original Castlevania titles on the NES, especially Castlevania III: Dracula's Curse. As the warrior Zangetsu, you must travel across multiple stages to reach the heart of the demon threat, slaying monsters and enormous bosses alike in your quest. As you defeat massive bosses, you will encounter other adventurers who can be recruited on your quest, and their abilities will support you and give you access to paths and options that are not available to other characters. Choices made during the game will also decide which one of Multiple Endings you will receive.

The four playable characters include:

A sequel was announced at the New Game Plus Expo which was later released on July 10th, 2020. Zangetsu, Miriam, Alfred, and Gebel all return from the last game, but they are joined by a brand new cast (of sorts, one of them already appeared in Ritual of the Night):

Inti Creates has set-up an official website for the game, which you can read here.

open/close all folders
Curse of the Moon 1 tropes

Bloodstained: Curse of the Moon contains examples of:

Curse of the Moon 2 tropes

Bloodstained: Curse of the Moon 2 contains examples of: 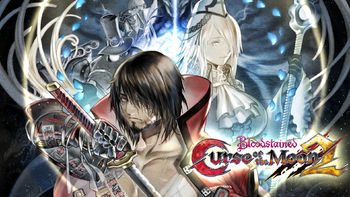