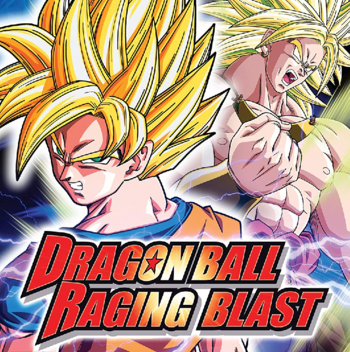 Developed by Spike and published by Bandai Namco Entertainment for the PlayStation 3 and Xbox 360 in 2009, Dragon Ball: Raging Blast is a 3D Fighting game based off of the Dragon Ball Z: Budokai Tenkaichi series, but with a noticeable difference in graphics and controls, having done away with the Blast Stock system entirely, and giving players complete freedom to customize every character's move set. The original Japanese release of the game is notable for being the first to use the updated cast from the Dragon Ball Z Kai era, as well as the final performance of the late Daisuke Gōri as the voice of Mr. Satan. The English dub of the game is notable as well for featuring the final performances of many original cast members from the dub, including Stephanie Nadolny as Gohan, Tiffany Vollmer as Bulma, and Brice Armstrong as Captain Ginyu, before they would be replaced the following the year beginning with the English dub of Kai.

It was followed up with Raging Blast 2 in 2010 for the same systems, which included additional characters from the movies (including Vegeta's brother Tarble, the rest of Cooler's Armored Squadron and Androids 14 and 15,) a re-animated version of the OVA Plan to Eradicate the Saiyans, and was noted for being the last game composer Kenji Yamamoto did the music for, before the plagiarism controversy saw him removed.