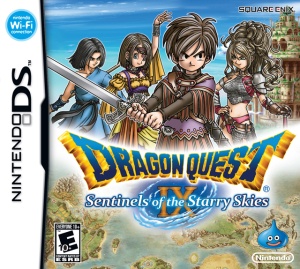 An MMO in the palm of your hand...
Advertisement:

Dragon Quest IX: Sentinels of the Starry Skies is the ninth installment of the Dragon Quest series, released on the Nintendo DS. In this world, a race of Winged Humanoids known as Celestrians watch over humankind from The Observatory. They also protect the Great World Tree, Yggdrasil, nurturing and nourishing, for it holds the key to their destiny. Select Celestrians have taken up a vital duty: to act as guardians of the mortal realm.

By watching over humankind, granting their wishes and shielding them from harm, these guardians can collect "benevolessence" (Don't worry, this being Dragon Quest, this isn't the only pun!) — a positive energy that replenishes the great Yggdrasil and allows it to flourish. With enough energy, Yggdrasil will be able to bear fruit, producing the sacred fyggs that will enable the Celestrians to follow the path of their elders and ascend to the upper realms.

However, disaster strikes, and a young Celestrian ends up falling to earth. Upon awakening, they discover that they've mysteriously transformed into a human...! Now, they must Walk the Earth with a small band of other travelers, helping those in need and trying to find out what exactly happened... and if there's any way for them to get back home.

One notable aspect of the game is the sheer amount of Character Customization open to the player. Not only can you name your heroes and determine their classes, you can fiddle with their height, hair, eyes, equipment, attire... In fact, their appearance changes to reflect whatever you currently have equipped. This extends to your teammates as well, enabling the player to create a very personalized party to take on challenges with.

It was released in Japan in 2009 by Square Enix and in North America and Europe in 2010 by Nintendo.

Has a blossoming Character Sheet.