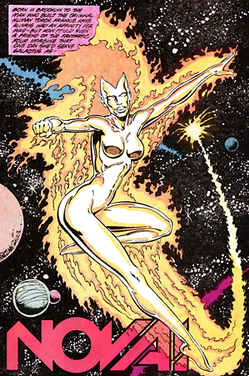 The night sky has been a source of wonder and inspiration for generations. Each new generation is told to "reach for the stars," and stories of people taking that advice quite literally can be found in your local bookstore's Science Fiction section. Most of us aren't so lucky as to be able to travel to the heavens, but there's still one consolation: We can name our children after them.

In brief, a Stellar Name is a character name derived from something found in the night sky, such as a star, planet, constellation, or other object. "Eta Carinae" or "Cygnus X-1" are unlikely, but these would probably also be Names to Run Away From. Terra would only count if falls under the above conditions.

(Note: As it can be difficult to determine whether a mythical character was named for a heavenly body or vice-versa, please refrain from listing them.)
open/close all folders
The Sky and Non-Specific Stars
Astra (meaning "stars" in Latin, but often interpreted as a feminine singular). Celeste (meaning "heavenly" or "pertaining to the sky"note (many languages do not make the distinction between "heaven" and "sky" that English does, instead having a word that can mean either), from the Latin caelum) is a not uncommon female name. Celestia (for the derivation see "Celeste") Celestine (Latin Coelestinus or Caelestinus, Italian Celestino, French Célestin, for the derivation see "Celeste") is a male name. It also has distaff counterparts (Italian Celestina, French Célestine). Celia is another name derived from Latin caelum ("sky, heaven"). It occurs in a number of variants and derivations, such as Céline (French) and Celina (Spanish), although in the latter case it can also be derived from Marcelina or Selina (Selene, see "Other Bodies"). Estella and Estelle (derived from Latin stella "star" via Occitan French Estèla) are common female names. Esther is a common female name meaning "star" in old Persian. It may in fact be the source of the word "star" as the proper Persian pronounciation is "Ishtar". Estrella ("star" in Spanish)

Etoile means star in French or something shaped like a star.

Specific Stars and Constellations
Other Bodies
Luna (Latin for "moon" and also the name of its goddess) is a common one Moon, the English word for Luna, is not quite as common, but occurs as a real-life surname Moon also appears in compounds and combinations Morgenstern (German for "morning star" — i. e. Venus or Jupiter, depending on their position relative to Earth) is a real-life surname Selene is the ancient Greek name for the moon and its older goddess (one of the Titans), who later became confounded with Artemis. The name is also used in astronomy, for instance "selenography" is an old term for the geography of the moon, and in older Speculative Fiction native inhabitants of the moon are called Selenites. Selene also occurs in variants like Selena and Selina. Other Moon-related names Sun-related names