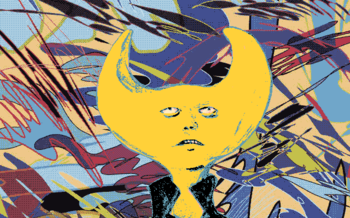 Hylics is a video game created by Mason Lindroth in 2015, described as "a recreational program with light JRPG elements."

Its world, from the environments to the battle sprites, is made entirely from pastel claymation.You play mainly as Wayne, a man with a waning moon for a head, on a vague quest to meet Gibby, the King of the Moon. The plot, if there can be said to be one, is heavily buried under symbolism and the general surrealism of the world.

, and can be completed in about ~2 hours.

A sequel, Hylics 2, was released in 2020. Described as a "recreational program with a unique graphic style and droll scenario," it follows Wayne and company as they seek to prevent Gibby's resurrection.