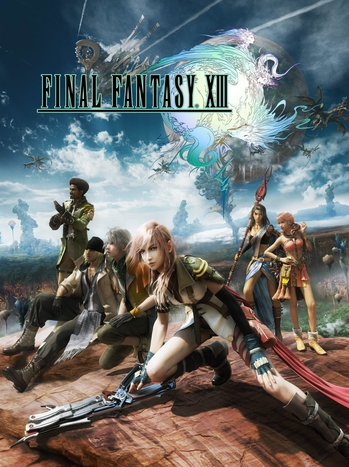 The Defiers of Fate.note From left to right: Sazh Katzroy, Snow Villiers, Hope Esthiem, Lightning Farron, Oerba Yun Fang, Oerba Dia Vanille.
Cocoon—a utopia in the sky.
Its inhabitants believed their world a paradise.
Mankind was blessed by its protectors, the benevolent fal'Cie, and believed that tranquil days would continue forever.
Their tranquility was shattered with the discovery of one hostile fal'Cie.
Advertisement:
The moment that fal'Cie from Pulse—the feared and detested lowerworld—awoke from its slumber, peace on Cocoon came to an end.

In the lore of Fabula Nova Crystallis: Final Fantasy, humankind lives alongside a race of god-like beings known as the fal'Cie. Those who are chosen by the fal'Cie for a greater purpose are known as the l'Cie ("luh-see"), with each one given a special mission called a Focus and magical powers to help accomplish it. Legend states that failure to accomplish one's Focus will transform the l'Cie into a hideous monster, but success will grant "eternal life".

Final Fantasy XIII takes place in Cocoon, a futuristic utopia created and operated by the fal'Cie. Not only does Cocoon provide a life of comfort and ease, but it protects its inhabitants from the savage and hostile world of "Pulse" that lurks outside its walls.

When a Pulse fal'Cie is discovered within the walls of Cocoon, the ruling government — fearing the creation of Pulse l'Cies — takes drastic measures by quarantining the entire district where it was found and ordering that everyone within be exiled to Pulse. Seeking to rescue her missing sister from the chaos of this "Purge", a young soldier known only by the codename "Lightning" rebels against the government and breaks through the military blockade to the Pulse fal'Cie.

There, Lightning and a Ragtag Bunch of Misfits are branded against their will by the Pulse fal'Cie and transformed into l'Cie. With an unclear Focus and the entire world of Cocoon turned against them, Lightning and the others must figure out a way to fulfill their new-found fate... or a way to defy it.

Final Fantasy XIII is the first part of the "ten-year project" known as Fabula Nova Crystallis: Final Fantasy, which was envisioned as a series of Final Fantasy games all sharing a common mythology. Unfortunately, development was filled with problems, the two biggest being an excessive amount of time spent developing the game engine, and a general lack of a cohesive vision amongst the development team.

A direct sequel was later released. A third game was released in 2014 and completes the trilogy.

The game was ported to Steam in October 2014; the entire trilogy is on Steam as of December 2015.

One side mission in FFXIII involves the party hunting down a powerful Cie'th. Unfortunately for them, something even more dangerous ends up being their opponent.

Example of:
Always a Bigger Fish

One side mission in FFXIII involves the party hunting down a powerful Cie'th. Unfortunately for them, something even more dangerous ends up being their opponent.