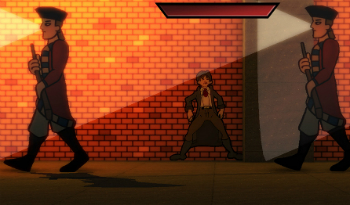 A type of Mook native to the Stealth-Based Mission and the No-Gear Level, which patrols around a certain area and alerts its allies if it spots something suspicious or an intruder. In Stealth Based Games, these sorts of enemies must be evaded, knocked out, or killed in a certain way lest other mooks discover their downed ally and/or the player or even cause a game over.

Compared to regular Mooks, they can be nearly the same except having equipment used in monitoring for intruders and may have devices to alert allies such as alarms. They may be accompanied by dogs, or some fantastic counterpart, which assist them in sniffing out enemies and attacking them. Alternatively they may use Surveillance Drones for the same purposes. Stat-wise, they may be frailer than regular Mooks so they can be easily dispatched if done properly.

Typically these sorts of Mooks are classified as "security guards" or just "guards".

More often than not, Patrolling Mooks tend to be Invincible Minor Minions that the player cannot fight back against. At best, the player character will be locked in a Cardboard Prison when caught; sometimes Patrolling Mooks have to catch you to transport you there, and other times it only takes them spotting you for your character to surrender on the spot (often despite being more than capable of fighting their way out in any other circumstance). At worst, Patrolling Mooks will be similar to the Instakill Mook in that they can One-Hit Kill your character, if not causing an instant Game Over as soon as they see you. As a result, the former variant are usually more annoying than deadly, while the latter are real threats.

Caleb acts out the common flaws of Patrolling Mooks.

Caleb acts out the common flaws of Patrolling Mooks.