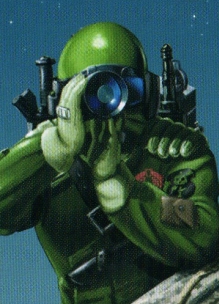 Cobra's Night Vipers like to watch you when you sleep.
Advertisement:

Nocturnal Mooks, naturally, only appear in the dark of night. Often several stages deadlier than their daytime brethren, the darkness surrounding the hero adds to the problem as they attempt to locate and slay the foul beasts within. They often tend to be Elite Mooks.