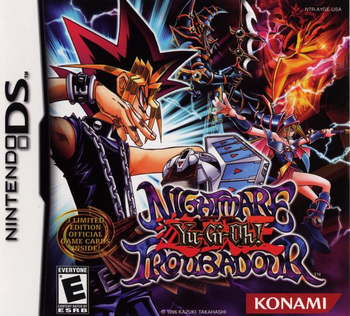 Yu-Gi-Oh: Nightmare Troubadour is a Yu-Gi-Oh! video game for the Nintendo DS. It was the first DS Yu-Gi-Oh game, and the only one on the system to solely focus on the original series' cast.

The plot of the game has you on a quest to become a great duelist, but soon becomes more complex as evil duelists appear, threatening your safety and eventually the safety of the world. It's up to you to stop them and save the world, with help from Yugi on occasion.