Video Game / Yu-Gi-Oh! The Duelists of the Roses 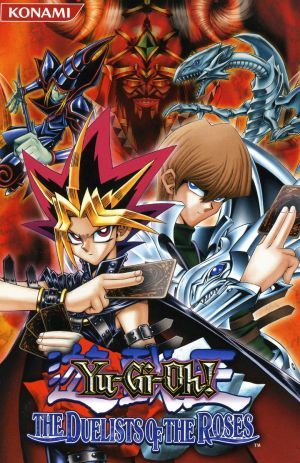 "A card! A card! My kingdom for a card!"
Advertisement:

The game centers on the player character (never named) being pulled through time to arrive at Stonehenge circa the mid 1400s, during the War of the Roses. Henry Tudor, who prefers his nickname "Yugi", has sent his priest Simon McMooran to Stonehenge to summon the "Rose Duelist", who is prophesied to be The Chosen One to turn the tide of war against the enemy Yorkists. However, Rose Crusader Seto Rosenkreuz has also arrived and offers the player to join the Yorkists and fight Yugi and the Lancastrians on their side. Both sides task the player to infiltrate the enemy's territory and duel their elite commanders to recover the "Rose Cards" from the other side. Each side has 8, and together the cards are said to unlock great power.

Gameplay is different from most Yu-Gi-Oh! games. Players control a Deck Leader on a large tiled board, and can only play one card a turn on a square adjacent to their Deck Leader. Once in play their cards, be they Monster, Magic or Trap, can move around the board freely until an opponent's card moves against them, revealing the Monster or activating the Magic or Trap effect.

The tiled board can be terraformed with Field Cards, with appropriate power boosts given for monsters battling on them. Players move their cards around the board, attacking opposing monsters or attacking the opposing Deck Leader directly, to deplete the opponent's Life Points. Otherwise the usual Early Installment Weirdness of the early Yu-Gi-Oh! video games, particularly freely fusing cards into new ones and using power-up cards on monsters they shouldn't affect, is in play.