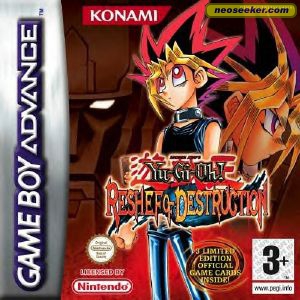 Someone's got to embark on a dangerous mission to find Yami Yugi and save the world from destruction — and all eyes are on you!
— The manual
Advertisement:

Yu-Gi-Oh! Reshef of Destruction is a Yu-Gi-Oh! video game for the Game Boy Advance, and a sequel to Yu-Gi-Oh! The Sacred Cards. It is an Alternate Continuity to the Yu-Gi-Oh! anime, taking place shortly after the Virtual World arc with Noah; thus, it can be considered an alternate story for season 4.

The plot starts off when the Millennium Puzzle goes missing. Your character, along with Yugi and Joey, sets out to find it. And it appears other Millennium Items are also missing. The group soon finds the cause: a man named "Sol Chevalsky/Taiyou Tenma" plans to resurrect Reshef the Dark Being, an Ancient Egyptian Sealed Evil in a Can. The only cards powerful enough to stop him are the Egyptian God Cards, but they have been sealed in stone. To awaken their power and seal Reshef away, you must collect the Millennium Items.

And it's not going to be easy. Another thing about this game? It's Nintendo Hard with Loads and Loads of Loading. Despite this, for some fans the story is enough to keep going, and it makes an interesting alternative to the DOMA arc of the anime.