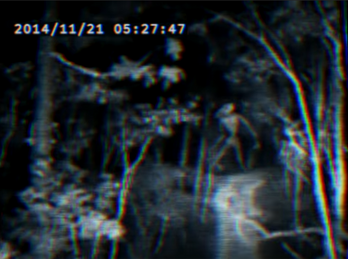 Your destination will be in 300 feet.
Some tapes are better left untouched.
Advertisement:

Analog horror is a Web Original subgenre of Found Footage. It stems from various channels creating EAS (Emergency Alert System) scenarios, which mainly rely on audio as opposed to visuals. It first appeared with visuals in The New '10s when the Trope Maker Local58 made their first videonote "Weather Service", uploaded October 26, 2015. It quickly spawned imitators, leading to the creation of this genre. These videos are almost always less than 10 minutes long and take the form of Ominous Television broadcasts, VHS tapes, radio broadcasts, or anything similar. They typically start out mundane and get progressively weirder/scarier.

Channels that host analog horror videos may pose as a number of things. Local58 and Channel 7 both pose as their namesake TV channels, Gemini Home Entertainment poses as a distributor of VHS tapes, and The Minerva Alliance and Analog Archives pose as organizations that collect anomalous footage.

To say this genre is blooming is a bit of an understatement, and new one-shots and series classified as Analog Horror are popping up all the time, and vary quite a bit in terms of scope, subject, and quality. See this video

for a decent overview of the topic.

Because videos of this genre have vague circumstances surrounding them, it is a big magnet for Wild Mass Guessing.

THIS CONCLUDES OUR BROADCAST DAY