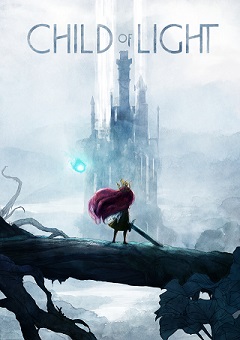 "To all those wandering lost in the dark, may you be visited by a spark"
Child, tuck yourself in bed
And let me tell a story
Of Lemuria, a long lost kingdom
And a girl born for glory.
Advertisement:

Child of Light is a Role-Playing Game released April 29, 2014 for PlayStation 3, PlayStation 4, Xbox 360, Xbox One, Wii U, Windows and Playstation Vita, and released October 11, 2018 on the Nintendo Switch. It was developed by Ubisoft Montreal and helmed by the creative director and writer of Far Cry 3, Patrick Plourde. Inspired by classic JRPGs such as Final Fantasy, Chrono Cross and Grandia, the game combines side-scrolling platforming elements whilst traversing the game world, and a turn based combat system reminiscent of the latter JRPG series. The game itself utilizes the UbiArt Framework engine, the same technology used to power Rayman Origins and Legends, to create a 2D environment and art style reminiscent of watercolor painting.

The story centers around Aurora, the daughter of an Austrian duke, who one night falls ill and passes into a dreamlike slumber. Upon waking, Aurora finds herself having been whisked away from her home to the magical land of Lemuria, which has had its sun, moon and stars stolen by the Queen of the Night. Tasked with a quest to restore the lights to their proper place, Aurora and her companions must brave the many monsters and perils of this strange land if she is to defeat the Queen, save Lemuria, and return home.

was written by the game's writer to celebrate the game's first year anniversary, and according to the creative director is set a couple years after the events of the game. Other works within the universe have been planned, such as additional books and a television series, but none have yet to materialize. Around the release of the Nintendo Switch version, Plourde would tease the idea of a sequel via a picture of a Child of Light II design document. He would then admit the following year that while he has already planned out the story and structure of the potential game, he feels it's very unlikely that Ubisoft would put it into production any time soon.

In 2021, Plourde announced a crossover project

involving Aurora and Igniculus, with more news incoming. On March 31, 2022, an answer was finally given, in the form of a free DLC update to Bloodstained: Ritual of the Night that makes Aurora a playable character, searching for her friends that have been lost in Gebel's castle.

Now, my dear, the fire has died,
The night is dark and deep,
Close your eyes, let go
And drift off to sleep.