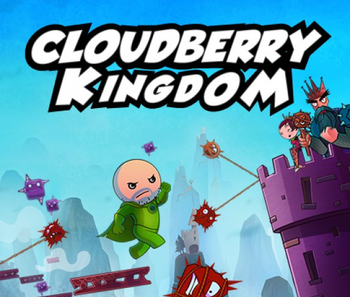 Cloudberry Kingdom is a Platform Game developed by Pwnee Studios and published by Ubisoft. It was released on July 30, 2013 for the Play Station Network, with Xbox Live Arcade, Wii U and Steam releases on the following days.
Advertisement:

You play as Bob, a platforming hero who's out to save a princess who's been kidnapped by an evil king an unknown number of times. The main draw to the game is that levels are procedurally generated, offering an optimal challenge based on the level and the power-up that Bob is using. Levels are very short, usually lasting no more than 15-20 seconds, but they all have various tricky jumps to make and death traps to dodge before reaching the door to the next level.