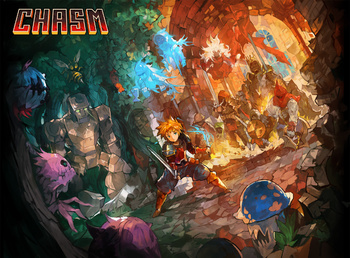 Chasm is a video game developed by Bit Kid, Inc. In it, the player is a Guildean apprentice who must pass his first true test in order to become a knight, which is done by venturing to the mining town of Kartha, all residents of which had mysteriously disappeared in the vast mines below...
Advertisement:

The game is a Metroidvania that took heavy inspiration from Castlevania: Symphony of the Night. The main difference is that its locations are procedurally generated at the start of every game; however, it has no other Roguelike elements, as the world persists until the game is finished, and player's death does not force one to continue from the start.

on Kickstarter in 2013. Its original demo can also be downloaded there. Since there were only three people involved, however, the development of the full version went on for five years, until it was released in July 2018.

Not to be confused with the 1997 First Person Shooter Chasm: The Rift.