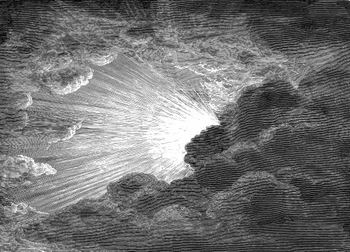 "[God] separated the light from the darkness."note The Creation of Light", Gustave Doré (detail)
"Where the light is brightest, the shadows are deepest."
— Johann Wolfgang von Goethe, Götz von Berlichingen
Advertisement:

Darkness is the absence of light, and light cannot exist without darkness. The dichotomy between the two has been part of human storytelling for a very long time—many Creation Myths often involve light emerging from darkness, and many destruction myths involve darkness engulfing light. Light and darkness also have many other symbolic means across many cultures. Thus, it is not uncommon for stories to visually, literally, or metaphorically juxtapose the two, often associating them with real-world notions (e.g. Light Is Good, Dark Is Evil) of light and dark. Shadow can be treated as more or less the same as darkness, or a mixture of both light and dark.

Because of its ubiquity, a light and darkness contrast can be lent to any number of Duo Tropes. A character with Light 'em Up or Holy Hand Grenade powers can have a Foil, enemy, counterpart, or rival in a character who uses Casting a Shadow or The Sacred Darkness. A Brooding Boy, Gentle Girl duo, a Light Liege, Dark Defender one, or an Angel Devil Ship might have appropriate light and dark motifs.

Light and dark can easily be treated as opposing cosmic forces. The Balance Between Good and Evil traditionally associates light with goodness and darkness with evil, although Light Is Not Good and Dark Is Not Evil are the increasingly common subversions to that. And since they are diametric opposites, when light and darkness clash it is generally a Yin-Yang Clash, and when people use both it's a Yin-Yang Bomb. Alternatively, Elemental Rock–Paper–Scissors will more often than not have light defeat darkness, since Light Is Good. There's a reason Darkest Hour is named so; "a light in the dark" is a phrase often used to symbolize hope—see Light Equals Hope.

This will frequently utilize Color Contrast via Color-Coded Elements, with light getting bright colors like gold and white (bonus points if it represents some sort of godly power), and dark getting deep colors like purple and black. Supertrope to Chiaroscuro, which is the contrast between light and dark used as a visual tool (also see Yellow/Purple Contrast).

A contrast between Heaven and Hell will likely have some of this mixed in, as will one between a God of Light and a God of the Moon. Cue the Sun functions as this, with the daylight symbolizing a new beginning after an arduous night. See also Nice Day, Deadly Night. The Evil Counterpart might be the "dark" version of something. Light Feminine Dark Feminine is this trope applied to femininity. Night and Day Duo is another related trope which pairs a light-themed "day" character with a (usually) dark-themed "night" character.