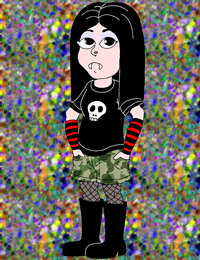 was a webcomic miniseries that debuted December 8, 2011, and ended March 29, 2012, created by Joseph Scarbrough. The comic centered around a vampire girl named Levana, who strongly dislikes all of the advantages of being a vampire, such as the many things she has to avoid like sunlight and garlic, and wishes to be human. At the same time, word of her existence gets out, prompting the town vampire hunters to hunt her down.