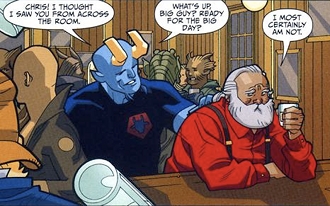 Blue Devil, a comic which debuted in 1984, told the tale of Dan Cassidy, a stuntman and Special Effects expert who was part of the crew for a monster movie. He created an amazing, full-body prosthetic devil suit chock full of Practical Effects, and, since this was the DC Universe, a strength-enhancing exoskeleton, as well.

That's right: he created functional, battle-ready Powered Armor, wrapped it in latex and animatronics, and used it as a movie prop.

Naturally, it got worse.

The movie was being filmed on location, in a Lost Mayincatec Temple of Doom, and the hapless Hollywoodlanders awoke the Sealed Evil in a Can: a demon named Nebiros.

Dan, of course, decided to fight off the demon in his souped-up rubber costume, and managed to drive it back into the aforementioned Can, and re-seal it. In the fight, alas, he took a full-on blast from the demon's Eye Beams — and when the dust cleared, he realized that he could no longer take the suit off. It was fused to him.

Because of this weird fusion of magic and technology, Dan became a Weirdness Magnet — in fact, this is the Trope Namer. His comic was a funny, fun-filled romp through the superhero universe, with tongue-in-cheek side trips into the territory later staked out by Vertigo. Dan even joined the Justice League, during the soap operatic and angst-heavy Gerard Jones run.

Needless to say, The '90s were not kind to him. He made an (involuntary) deal with a devil for increased power, and now really is a devil.

Since then he's become a member of a team title, Shadowpact, which has a team of magical troubleshooters including other "esoteric" DC heroes, which include Detective Chimp and Phantom Stranger, and has even joined the Justice Society of America. His sidekick, Kid Devil, suffered a similar fate (and later joined the Teen Titans).

In the New 52, Blue Devil co-stars with Black Lightning in a few issues of the Anthology Comic, DC Universe Presents. In the New 52, Dan Cassidy is once again a man in a blue skinned devil suit. However, the suit is now completely magical, as it is actually made from the skin of the demon Nebiros. The suit was given to him by his grandfather.