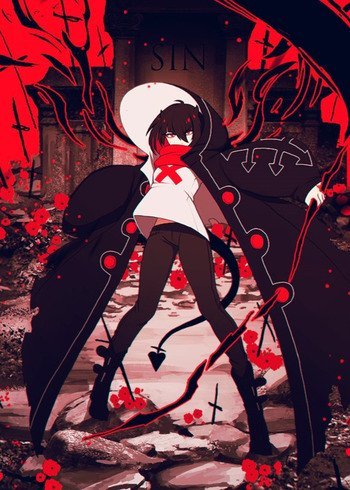 " On earth there are bad people, and then there are REALLY BAD people. If you’re one of the latter, you don’t just get sent to Hell, you get sent to Hell and get assigned a job collecting the souls of some of the worst people on Earth. Such is the career path of a young woman named Scarlet, who dies and is delivered down to the fiery underworld only to find herself in an entry level position as…The Grim Reaper!
— Description on Webtoon
Advertisement:

is an Animesque Webcomic created by Graveweaver in 2018, and was featured in August 2019.

Upon a young woman's death, she loses her memories and is taken directly to Hell, where she not only meets the devil, but is informed that she was one of the worst sinners there were, and is given a choice: either become one of his grim reapers, or be sentenced to the ninth circle of Hell, a complete void lacking in any of the five senses.

To avoid this fate, she agrees. Going by the name of Scarlet, she now has to kill one sinner per day, lest she be taken to the ninth circle. However, she meets a detective who seems to know something about who she was while alive. Hungry for answers, she teams up with him to try to discover who she was while alive. However, she's keeping her identity as a reaper a secret, and she still must find and kill one sinner every day, which complicates things.