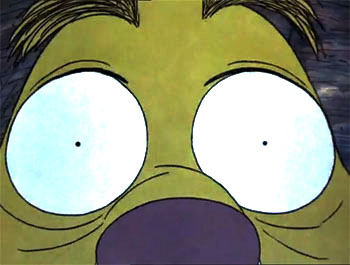 As Pooh would say, "Oh, bother."
Calvin: What do you do, wait until you see the whites of my eyes?!
Hobbes: You should've seen them! They were as big as dinner plates!
— Calvin and Hobbes
Advertisement:

Can also happen if a character is badly injured, with bonus points if the scene cuts away to a Scream Discretion Shot. On the flip side, it can also be used when a character is very, very angry.

A very minor case of Artistic License – Biology: while the pupil inside the iris can indeed shrink due to fear, the iris itself does not. Regardless, most artists consider it an Acceptable Break from Reality (see Open the Iris for reasons why).note That being said, a lot of examples feature cartoon characters whose eyes are only white circles with a black spot in the middle; and for them it's unclear if they have only a pupil and no iris at all, or very small irises the same color as their pupil.

Frequently overlaps with Oh, Crap!. In Anime, this may be replaced with Blank White Eyes instead.

Contrast Open the Iris, the trope's physical opposite. If this effect only happens to one eye and not the other, it's a case of Mad Eyes. Not to be confused with Sphere Eyes, which always look like dots.