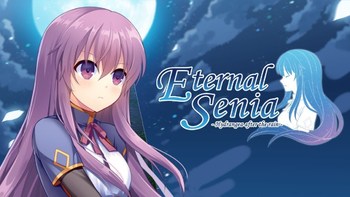 Eternal Senia: Hydrangea After The Rain is the second game of the Eternal Senia series, and sequel to Eternal Senia. This game is for iOS and Android. It was initially released on December 20th, 2017 in Asia, with the international version releasing on December 20th, 2018, the game's first anniversary. Senia, Little Fairy and Magaleta return, and are joined by Hugo, a mage, Briella, the Bishop of Balder, and Sophie, a girl found on the plains surrounding the Tower of Eternity.

Following the third ending of the previous game, Senia decides she needs to become stronger before making another attempt at rescuing Magaleta, and begins by responding to a call for help from her hometown of Renata originally meant for Magaleta.

It is a combination of the Idle Game tapping genre with a mix of Visual Novel storytelling, gacha collection, and mechanics similar to Granblue Fantasy, such as an Elemental Rock–Paper–Scissors (with Light and Dark separate from the wheel), a 5-slot weapon grid system, being able to summon companions and uncapping them with duplicates, Equipment Upgrade system for weapons, a four-skill limitation, and bosses entering special states.