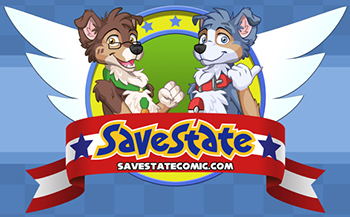 How crazy are they for video games?
Advertisement:

is a Furry Comic by Tim Weeks, started on February 5, 2014, with updates every Wednesday. It follows the adventures of twin anthropomorphic Australian Shepherds named Kade (male, blue merle) and Nicole (female, red merle).

Something the two have in common is a passionate love for video games. A lifelong passion, as they show their skill in everything from the original NES and Game Boy, to the Xbox One and PS4, and even the Virtual Boy.

As stated at the top, the comic takes some cues from previous webcomics. The main characters are fully anthro, though unlike Housepets!, it's apparently set in a World of Funny Animals. They are also fully grown-up; Kade, at least, is seen to have a job, and Nicole drives a car.note Tim Weeks said they're both about 25. It also is heavily themed in video gaming, though it's not quite as snarky as VG Cats.

Much of the content is Slice of Life, though Tim launched the comic's first storyline when the twins inherited a mansion. An apparently haunted one at that.